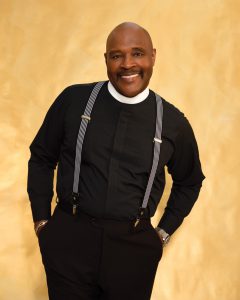 Pastor Marvin L. Winans is the founder and Senior Pastor of Perfecting Church located in Detroit, Michigan. The city where he was born and raised. He also selflessly serves as Senior Pastor at Perfecting Church-Toledo located in Toledo, Ohio, and is Bishop-Elect of Perfecting Fellowship International which, includes churches throughout the United States, United Kingdom, and South Africa. These extensions of the ministry do not lack in covering or anointing as Pastor Winans is always present, available, and ready for the next task to move these ministries forward.

World renown for his innate gifting to preach, he is also an eternal member of the group, The Winans, discovered by Andrae Crouch. This group transformed gospel music without losing the message of Jesus Christ. The 80s and 90s hit group, The Winans earned five Grammy awards and had multi–Billboard R&B chart hit songs. Winans pursued music beyond the group by producing multiple albums, collaborated with various artists, launched a solo album, Alone but Not Alone, and an album with his brothers, The Three Winans Brothers, called Foreign Land. He started his own label, MLW Productions, and can be found singing in or at any service hosted at Perfecting Church.

Pastor Winans has used his voice not only to bless the world through song but in scripture and works tirelessly to ensure that the needs of Perfecting Church and Perfecting Fellowship International ministries, congregants, and community partners are met. Pastor Winans is an author of the book entitled; Image is Everything. And as a servant leader, the script speaks for itself.

As the fourth of ten children to David and Delores Winans, he stems from a lineage of holiness and has used his gifts to bless the nations for many years. He is the father of three sons and the Pastor of a congregation of thousands. Ministry Means People is the mantra that he has mandated for Perfecting, and as he continues to lead the ministry, the people continue to come.

We use cookies on our website to give you the most relevant experience by remembering your preferences and repeat visits. By clicking “Accept All”, you consent to the use of ALL the cookies. However, you may visit "Cookie Settings" to provide a controlled consent.
Cookie SettingsAccept All
Manage consent

This website uses cookies to improve your experience while you navigate through the website. Out of these, the cookies that are categorized as necessary are stored on your browser as they are essential for the working of basic functionalities of the website. We also use third-party cookies that help us analyze and understand how you use this website. These cookies will be stored in your browser only with your consent. You also have the option to opt-out of these cookies. But opting out of some of these cookies may affect your browsing experience.
Necessary Always Enabled
Necessary cookies are absolutely essential for the website to function properly. This category only includes cookies that ensures basic functionalities and security features of the website. These cookies do not store any personal information.
Non-necessary
Any cookies that may not be particularly necessary for the website to function and is used specifically to collect user personal data via analytics, ads, other embedded contents are termed as non-necessary cookies. It is mandatory to procure user consent prior to running these cookies on your website.
SAVE & ACCEPT